scintilla WITH THE BEST

The "best traditional panettone in Italy" 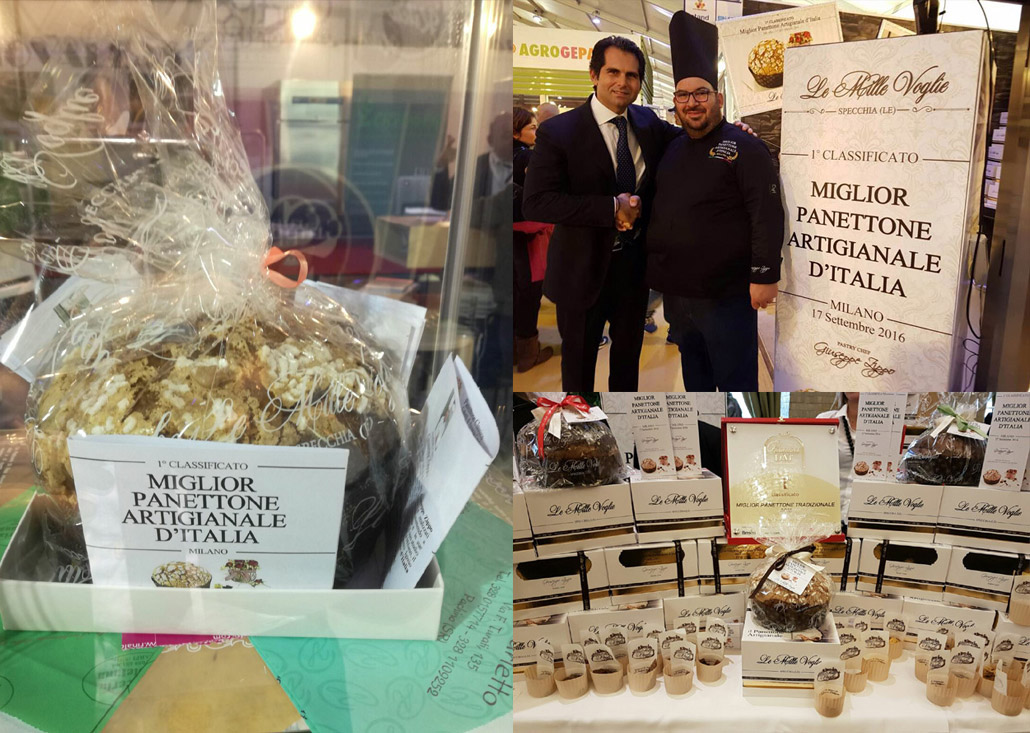 The Panettone made by the patisserie Giuseppe Zippo, owner of "Le Mille voglie" in Specchia was awarded as the "Best Traditional Panettone 2016", a recognition awarded as part of the "Panettone Day" event, organized during the event " Sweety of Milano ”, an important gourmet event open to the public, which took place on Saturday 17 September, in the spaces of the Palazzo delle Stelline in Milan. The competition was attended by 150 pastry chefs from all over Italy and Zippo was the winner after a selection among the 20 finalists of the competition, previously ranking first in Puglia, Basilicata, Calabria, Molise and Sicily, arriving in seventh place for the category "Best Panettone Creativo Dolce ”, where only the first 5 pastry chefs were selected for the final. The pastry chef Zippo operates in Specchia, a town that can boast several families who in the last century, in the field of confectionery art, have gathered acclaim in the whole of Puglia: Maisto and Lombardo and still can still include the Martinucci Group that markets the pastry throughout Italy and around the world.

Giuseppe Zippo made the panettone with craftsmanship and, above all, with quality products distributed in Lecce by Oronzino Palma's Creamgel such as: flour, sugar, Salento honey, vanilla beans, butter cream, orange paste, egg yolks fresh, sultanas, cedar and orange cubes, kneaded several times, leavened for a long time, with Apulian almond flour glaze and fresh egg white, with powdered sugar and baked in a rotating oven.

“I am happy - declared Zippo - to have won. My commitment has been rewarded and cost me so many sacrifices. It is not easy to conquer Milan with a product like panettone which is typical of the Lombardy region. Producing an artisan panettone in Specchia and winning in Milan was truly a great undertaking ". The 20 competitors were judged by a jury of excellence composed of the Amalfi pastry chef Sal de Riso, the Bolognese pastry chef Gino Fabbri, the food blogger Chiara Maci, while the president of the jury was the well-known Brescia pastry chef Iginio Massari, according to Gambero Rosso from 2011 to 2015, best Italian pastry chef and twice coach of the Italian Pastry Team at the Pastry World Cup.

The jurors evaluated each Traditional Panettone according to some fundamental characteristics: taste; form; color; quality ingredients; scent; softness / fragrance; cut; alveolation; uniform distribution of fruit and cooking, formulating the following ranking for the category "Best Traditional Panettone": 1st place for Giuseppe Zippo from Specchia (LE), 2nd place for Fabio Gotti from Scanzorosciate (BG), 3rd place for Elio Mattiauda from Boves (CN), 4th place for Luigi Bonadei, 5th place for Claudio Rancan from Arzignano (VI). For the category "Best Creative Sweet Panettone" Giovanni Bertolini from San Bonifacio (VR) In addition, for the whole of next October, Giuseppe Zippo and the 24 finalists will exhibit and sell their Traditional and Creative Sweet Panettoni in Milan in the Panettone Day Temporary Shop in Corso Garibaldi 42, a real Panettone-themed shop and it will be advertised. the name of the winner and that of the finalists.